AT THE SIX-MONTH MARK OF THE TRUMP ADMINISTRATION, AMERICANS WORRIED ABOUT U.S. STATURE IN THE WORLD, IOP HARVARD KENNEDY SCHOOL POLL FINDS

59% of Americans would like to recall and replace the President,
44% say same about their Member of Congress 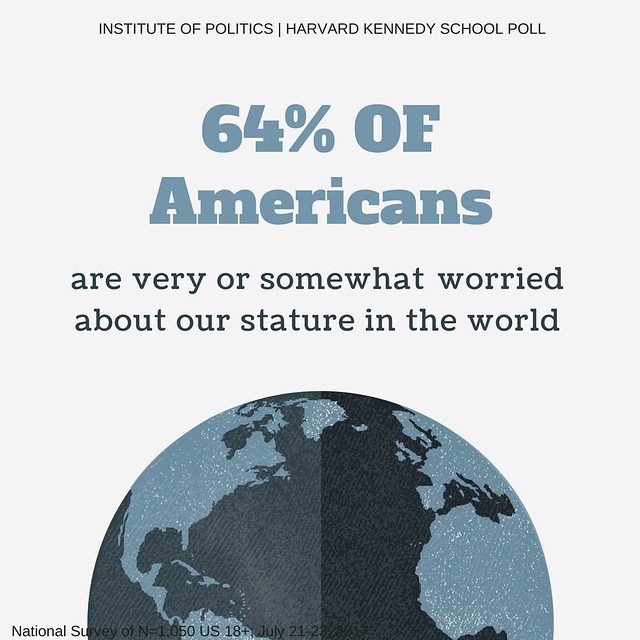 July 27, 2017
Almost two-thirds (64%) of Americans are very or somewhat worried about the United States’ stature on the world stage, including 63% of Millennials (Americans between the ages 18 to 37), according to a new national poll from the Institute of Politics at Harvard Kennedy School (IOP).

“This poll confirms a sense of fear about the future I have encountered as we talk with Americans from across the country in town meetings and focus groups. From our research, this goes far beyond views of the President or any party as Americans of all ages are seeking a transformational leader to end the chaos and reconnect us around a common purpose, at home and abroad,” said John Della Volpe, Polling Director at the IOP.

The KnowledgePanel® survey of 1,050 adults in the U.S., including 357 Millennials, with a margin of error of +/– 3.0 percentage points (95% confidence level) conducted with GfK Custom Research for the IOP between July 21 and 23 also finds:

Following are the results of the key questions based on Americans ages 18+, registered voters and members of the Millennial generation:

The survey was conducted using the web-enabled KnowledgePanel®, a probability-based panel designed to be representative of the U.S. population. Initially, participants are chosen scientifically by a random selection of telephone numbers and residential addresses. Persons in selected households are then invited by telephone or by mail to participate in the web-enabled KnowledgePanel®. For those who agree to participate, but do not already have Internet access, GfK provides at no cost a laptop and ISP connection. People who already have computers and Internet service are permitted to participate using their own equipment. Panelists then receive unique log-in information for accessing surveys online, and then are sent emails throughout each month inviting them to participate in research.